Welcome to a witchy week. Instead of our usual question, we’ve decided to offer some fun Halloween inspired movies, and treats for all the family, to celebrate what is Researching Reform̵…

Trump rally in Albany, New York. Our report of court corruption and reform was hand delivered to campaign staff.

Is there any one out there who will take solid steps to end the abuse of parents in America’s divorce and family courts?

Among the presidential candidates we all know the answer, and that’s Donald Trump.

Numerous elections have come and gone over the past fifty years and yet here we are still warring over our children in these barbaric tribunals that enrich lawyers at the expense of our children.

How many parents can truly say they got a fair shake in these courts?

While the scandals, bribes and misconduct become exposed, the corruption is only escalating. And most of it is overlooked unlike other branches of government.

It’s up to us to reform this system, to replace mandatory custody awards with a shared parenting framework, to rein in over-billing lawyers who profit from needless orchestrated court battles, and take back our courts. 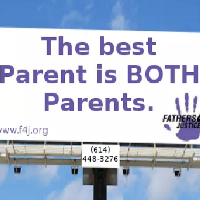 Children s Rights Florida
Fighting to preserve Parent–Child relationships to improve the lives of children and strengthen society by protecting the child’s right to BOTH Parents!
END_OF_DOCUMENT_TOKEN_TO_BE_REPLACED

It is largely fatherhood which makes childhood possible.

Mothers make infants but when the infants become children they are likely to be less well socialized if they have no fathers. 1 It is largely father absence which creates ghettos and gangs and messed-up kids—boys trying to find their identity through violence, girls trying to find their identity through sexual promiscuity which generates the male violence of the next generation. They need real fathers, sociological fathers, not mere biological studs interested in a one-night stand or a brief or superficial relationship. Sociological fatherhood is real fatherhood. It is also what Margaret Mead called “a social invention.” In the ghettos biological fathers seldom become sociological fathers, seldom amount to much, because Mom’s sexual promiscuity or disloyalty—her belief in what feminists call a woman’s right to control her own sexuality—denies them the role of sociological fatherhood. Lawmakers and judges fail to understand that fatherhood is a social invention, that it must be created and maintained by society. This is the main reason patriarchal society— the father kinship system—exists. They do not grasp that social heredity has become part of biology and that fathers are the primary means of transmitting social heredity. They suppose that humans can live like cattle, without fathers, with only the meager social heredity found in female kinship systems such as ghettos and Indian reservations. Until lawmakers and judges see that they must support the father’s role because it is the weak biological link in the family we will have more matriarchy—along with its accompaniments: educational failure, illegitimacy, teen suicide, gangs and the rest.

This book deals with the problems of: THE FEMALE KINSHIP SYSTEM OR MATRIARCHY OR THE CLASSIFICATORY SYSTEM OR MOTHER-RIGHT——the system of female-headed families” which has created ghettos and barrios by encouraging women to marry the state and breed fatherless children who are eight times more likely to become delinquent.

END_OF_DOCUMENT_TOKEN_TO_BE_REPLACED

An Open Letter To Men From A Real Woman

Everyday there’s news/outrage about the latest female tragedy, the “war on women” the #SJW feminist women, the body-shaming women. Then there’s “rape culture” and “male privilege,” and “micro-agression.”

Well as a woman (yeah, it’s Courtney Kirchoff here, not Steven Crowder), here’s something you need to know: women love men. For being men.

Okay, several feminist keyboards have been reduced to dust. Chicas are hammering their keys like the old cavemen hammered their women before dragging them into the cave. Oh that right there? Joke. I know you feminists don’t think it’s funny. Nothing to you is funny. That’s why it’s funny.