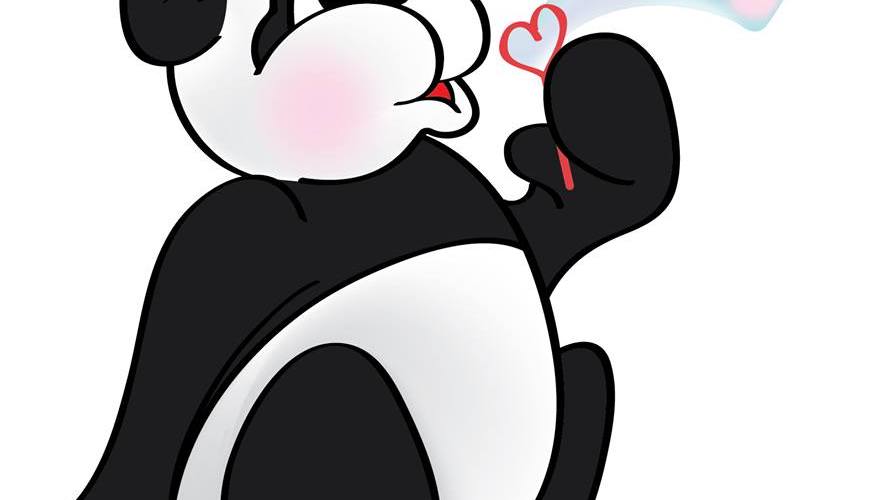 The Bubbles of Love Annual Celebration focuses on the need to educate the world about parental alienation. Divorced parents must stop using their children as weapons of emotional war against their former spouses. It is not fair to the children or the other spouse. 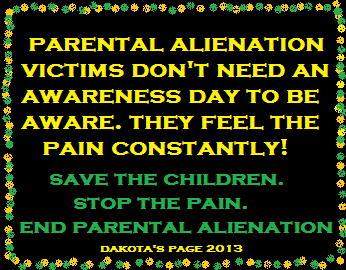 Helping to bring awareness that by increasing the proportion of children growing up with involved, responsible, and committed fathers it will improve the well being of children. 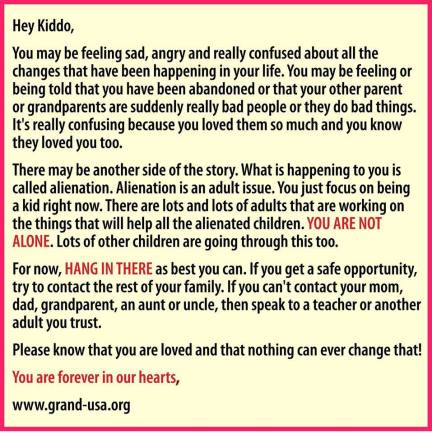 END_OF_DOCUMENT_TOKEN_TO_BE_REPLACED

Parental alienation involves the “programming” of a child by one parent to denigrate the other (targeted) parent, in an effort to undermine and interfere with the child’s relationship with the targeted parent, and is often a sign of a parent’s inability to separate from the couple conflict and focus on the needs of the child.

The Impact of Parental Alienation on Children

I offer the first installment of a three-part series examining (1) the impact of parental alienation on children, (2) the effects of parental alienation on parents, and (3) programs, services and interventions that combat alienation and seek to reunite estranged parents and their children. What children of divorce most want and need is to maintain healthy and strong relationships with both of their parents, and to be shielded from their parents’ conflicts. Some parents, however, in an effort to bolster their parental identity, create an expectation that children choose sides. In more extreme situations, they foster the child’s rejection of the other parent. In the most extreme cases, children are manipulated by one parent to hate the other, despite children’s innate desire to love and be loved by both their parents. Parental alienation involves the “programming” of a child by one parent to denigrate the other “targeted” parent, in an effort to undermine and interfere with the…Read More

Ten Parental Alienation Fallacies:
1. Children never unreasonably reject the parent with whom they spend the most time,
2. Children never unreasonably reject mothers,
3. Each parent contributes equally to a child’s alienation,
4. Alienation is a child’s transient, short-lived response to the parents’ separation,
5. Rejecting a parent is a short-term healthy coping mechanism,
6. Young children living with an alienating parent need no intervention,
7. Alienated adolescents’ stated preferences should dominate custody decisions,
8. Children who appear to function well outside the family need no intervention,
9. Severely alienated children are best treated with traditional therapy techniques while living primarily with their favored parent,
10. Separating children from an alienating parent is traumatic.

The article provides a summary of the research on parental alienation that has emerged over the past decade. As with Warshak’s (2014) article, “Social Science and Parenting Plans for Young Children: A Consensus Report,” it supports shared parental responsibility as in the best interests of most children of divorce, and as a remedy for parental alienation. It is an important contribution to understanding the most common errors in judicial practice and social policy in this arena, as well as in mental health practice. It is the implications for intervention with children and families that should be of special interest to us.

One of the most controversial points is the last, “Separating children from an alienating parent is traumatic.” Alienation and isolation by a parent in the absence of a child protection order is damaging to a child, and is itself a child protection concern. The key for children is to reunite with the alienated parent, ideally with the support of the other parent, which necessarily entails temporary separation from that parent. However, complete separation from an alienating parent may be a form of alienation in itself.

Another mistaken assumption that struck me is, “Young children living with an alienating parent need no intervention.” It seems difficult to believe that such an assumption still exists, but there has been a widespread and persistent denial by some practitioners and policymakers about the reality of parental alienation. The fact that “parental alienation syndrome” is not identified in the Diagnostic and Statistical Manual of the American Psychiatric Association, Fifth Edition (DSM-V), for example, does not mean that parental alienation does not exist; as Warshak’s consensus statement and other meta-analyses have demonstrated, parental alienation is much more widespread than is commonly assumed.