It is largely fatherhood which makes childhood possible.

Mothers make infants but when the infants become children they are likely to be less well socialized if they have no fathers. 1 It is largely father absence which creates ghettos and gangs and messed-up kids—boys trying to find their identity through violence, girls trying to find their identity through sexual promiscuity which generates the male violence of the next generation. They need real fathers, sociological fathers, not mere biological studs interested in a one-night stand or a brief or superficial relationship. Sociological fatherhood is real fatherhood. It is also what Margaret Mead called “a social invention.” In the ghettos biological fathers seldom become sociological fathers, seldom amount to much, because Mom’s sexual promiscuity or disloyalty—her belief in what feminists call a woman’s right to control her own sexuality—denies them the role of sociological fatherhood. Lawmakers and judges fail to understand that fatherhood is a social invention, that it must be created and maintained by society. This is the main reason patriarchal society— the father kinship system—exists. They do not grasp that social heredity has become part of biology and that fathers are the primary means of transmitting social heredity. They suppose that humans can live like cattle, without fathers, with only the meager social heredity found in female kinship systems such as ghettos and Indian reservations. Until lawmakers and judges see that they must support the father’s role because it is the weak biological link in the family we will have more matriarchy—along with its accompaniments: educational failure, illegitimacy, teen suicide, gangs and the rest.

This book deals with the problems of: THE FEMALE KINSHIP SYSTEM OR MATRIARCHY OR THE CLASSIFICATORY SYSTEM OR MOTHER-RIGHT——the system of female-headed families” which has created ghettos and barrios by encouraging women to marry the state and breed fatherless children who are eight times more likely to become delinquent.

Fighting the disease, not treating the symptoms…

I wish you well and hope you know that you’re not at all alone. Life can give us skills whether we want them or not. In time, every father facing custody and court cases involving family law will develop a ‘thicker skin’ as we all know that nothing is more personal then an attack against your human rights, your rights as a parent and your ability to parent a child.

I would like to express a very important concept today. This is extremely bold and progressive. I believe their is no ‘movements’ in the world today to change the opinion of culture in the way that will actually build up momentum.

I would like to give you an example. (the example is not aimed to defame or harm homosexual couples in any way, simply a random example.)

Equality for homosexual relationships in the USA have become popular.

Single Male parents seeking Equality in Custody and Family law is NOT.

Who do you believe will be the first to win Public approval in the equality of raising children?

A large portion of Society will back gay rights to have two males or two females raise a child… Will Society recognize the human rights of a Male parent to have ABSOLUTE EQUALITY in custody decisions or family court? The reason behind this is because Gay rights do not threaten the power of women as much as the concept ‘ MAN VS WOMAN ‘

When I started to think about this in depth, I realized that all the titles ‘Fathers rights‘ are actually a way of setting yourself apart from the majority of people who are actually in favor in society and doing more work to make and change laws. You can go out in your yard and wave a giant flag ‘TEAM MEN!’ then go into society against ‘team women’ and see how big the teams are…

A child’s best interest is Equality & Human rights. In fact.. you.. yes you.. reading this.. were you a child? Are you suffering loss right now? are you hurting? do you see a broken legal system that effects you because your gender? Are you best interest still important to the court? NO…The real team we should all be one is ‘ TEAM EQUALITY FOR PARENTS ‘ using Human rights and a ‘gender-less’ approach to rights as a parent. This way you are not allowing society to put you on the small team. You are a parent… the same way you are a Human (EQUAL). Many arguments are made based on age and gender. ‘for the best interests of the child‘ should NEVER be used as a justification to disregard the rights of a parent.

The best interests of a child is just a term that was created by a person, made popular in litigation and put into law as a strong tactic to redirect focus and manipulate the overall outcome of a case. A 4 year old is NOT going to remember being taken away from his/her mother in the same respects as a parent that loses his/her child. Day to day memories, complex thought process, life and all that we as adults have to do to live is drastically effected and sometimes destroyed by the term ‘in the best interests of the child’.

In the BEST interest of Human Rights and Equality, as a parent, I advocate on the equal rights of a child and parents to eliminate any gender bias or popular cultural opinions about any parent. In law and to the world I am a Human and parent first… Do not judge me by my gender.

Human rights are LAW, public policy guides local and federal laws through a general cultural opinion that develops in popular media and different ‘movements’ in society. People (yes.. just people…) will lobby and push concepts on our government to enact laws that limit our human rights, this is not legal, but worded so ambiguously it is not correlated to its violation of our basic human rights until intense litigation and logical arguments are made and no one seems to argue it when its enacted.

There is NO special exceptions to Equality. Human rights are the same for all Human beings with NO SPECIAL CONSIDERATION for gender, age or race.

You must treat the disease, not the symptoms.

This overall message is critical, but I have still seen people waving the wrong flag. Yes it is glorious but you’re on the small weak team that is going to get stomped out, you have seen it… it’s not helping. The overall picture is human rights, parental rights. When you go into court, try making a point to keep yourself from defining yourself on the team that is not popular or favored in society. Proudly claim yourself as a parent without defining yourself as a man. This needs to be common practice in family law. All references to gender in ALL forms of law need to be ELIMINATED.

This is going to be a movement eventually… let’s start one.

My name is Ryan Sellars and I am a Human being… a Parent.

Do not define me by my gender or race or popular opinion, but by my basic human rights as a parent. 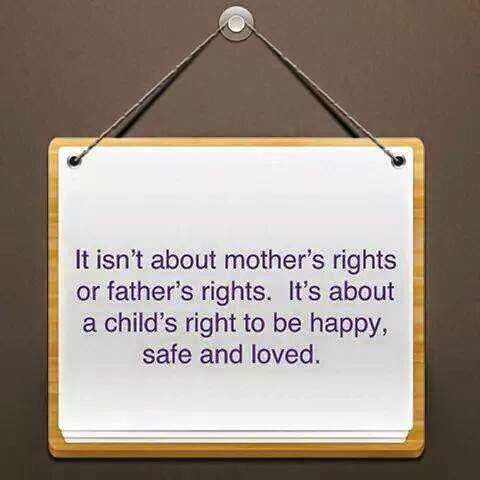 27 thoughts on “It is largely fatherhood which makes childhood possible”